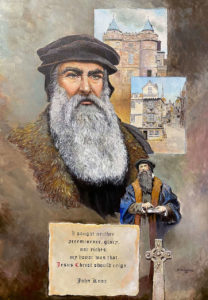 Born in Scotland, John Knox was ordained as a Catholic priest sometime between 1530 and 1540. He was converted to Christ after he met a Bible-believing Christian, George Wishart who was later burned at the stake in 1546. Shortly afterward Knox was arrested by the “authorities” and made a galley slave for nineteen months. He went to England in 1549 and preached the Bible until the reign of Bloody Mary, during which time he lived in Frankfurt, Germany. There he came under the influence of John Calvin. He returned to Scotland after several years in Geneva and began preaching against the papal church. He was arrested under Queen Mary Stuart in 1560 and tried for treason but acquitted.

One of the greatest contributions Knox made to the Reformation in Scotland was the Book of Discipline, which he and his associates prepared at the request of Parliament. The book was the brainchild of Knox. In it he set forth principles for the guidance of the Church. He gave strong emphasis to the nature of education of all children. Stalker wrote that nothing bears more distinctly the impress of Knox’s genius as does the Book of Discipline. “It comes away in a single gush, and it causes a dazzling image of national prosperity to rise before the mind.”

In the Book of Discipline Knox called for a system of education that was breathtaking for that age.

Every town should have a schoolmaster, and in every rural parish the minister or reader should teach the children and come to them. Men should be compelled by the Kirk and the magistrates to send their children – bairns – to school. Poor men’s children should be helped, and no one should be denied basic education.

Knox spent his remaining years preaching and lecturing in Edinburgh and St. Andrews. Above all others he was the maker of Protestant Scotland. he preached “hell-fire and damnation” to Queen Mary of Scotland and also to Bloody Mary, Queen of England. Of him it was said, “Here is one who never feared the face of man.”