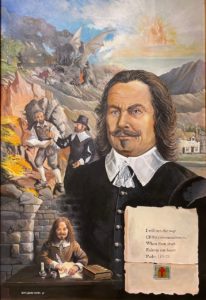 English Baptist preacher and writer, John Bunyan was born in Elstow, England near Bedford where he spent most of his life. Although today he is regarded as a literary genius, he had little formal education. At the age of 16, this rough and profane young man enlisted in the army of Parliament and saw active duty during the English civil war. In 1647 at the age of 19, he married a young woman who persuaded him to attend church with her regularly where he heard the Gospel. After deep and prolonged soul struggle he made a complete surrender to Christ and was converted, after which he was baptized and joined the Baptist church of Bedford.

Soon he began to preach there and also in the surrounding villages which caused the people to recognize in him elements of leadership as well as ability as an expositor of the scriptures. Continuing in his trade as a tinker, he witnessed wherever he went. He spent his holidays and Sundays preaching in barns, shops, village greens, as well as in the open air. Such great crowds began to follow him that it led to his arrest and imprisonment in 1660 for conducting a “conventicle,” a religious meeting without the permission of the state church. When offered his freedom if he would promise not to preach, he refused and chose jail. While imprisoned he studied, preached, wrote, and supported his family by making and selling shoe laces.

It was while a prisoner that he wrote his immortal “Pilgrim’s Progress.” In 1672 he was released and immediately resumed his ministry. During the last sixteen years of his life he was active as pastor, writer, helper, counselor, organizer, administrator, and pastor-in-chief to a multitude of churches and young ministers. Bunyan was a champion for the cause of religious liberty and freedom of conscience in spiritual matters. One who knew him well wrote, “The grace of God was magnified in him and by him, and a rich anointing of the Spirit was upon him; and yet this great saint was always in his own eyes the chiefest of sinners and the poorest of saints.” He died in 1688 after riding forty miles in a driving rain on horseback to London to preach. He was always a poor man, yet through his example, his ministry, and especially his pen, he bequeathed inestimable riches to posterity.